A change of government led to the land being transferred to Crown Land/Parks and Wildlife but not given conservation status. Our aim is for all the FPPF lands to be protected in secure reserves.

On Sunday the 24th of November at 2.30pm - 3.30pm in the St Helens Neighbourhood House Bungalow we will be running a public information session about the protection of native forests on the East Coast currently referred to as Future Potential Production Forests 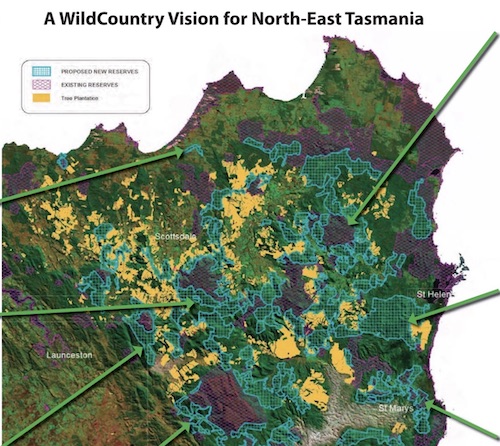 North East Bioregional Network in association with the North East Tasmania Land Trust has been trying to secure the long term conservation of this beautiful piece of land for the past two years. The land is in excellent ecological condition with a range of habitats and high flora and fauna diversity.

What is Linking Landscapes?

It is a long term and wholistic vision for landscape and marine protection which seeks a balance between conservation and other land uses.

Since commencing in 2006, Linking Landscapes has produced a new blueprint for landscape conservation on public land in north-east Tasmania , which has identified around 148 000 hectares of potential reserves. Future elements will include conservation on private land, protection of marine ecosystems, and restoration of degraded landscapes.

National Parks and other types of reserves are the basis for nature conservation in Tasmania . But they have limitations. Many natural processes occur on a larger scale than the small island-like reserves which presently occur in north east Tasmania . Large, well-connected areas of protected land are needed.

"Connectivity between habitat patches has emerged as one of the most important principles in landscape management and conservation in recent years." Dr Peter McQuillan. For example, Tasmania's Threatened Fauna Handbook (Bryant and Jackson 1999) recommends maintaining patches and corridors of 50 to 100 km 2 of suitable forest habitat in the landscape for quolls because these native carnivores have large home ranges.

Established conservation projects such as the Wildlands Project in North America and Gondwana Link in south-western Australia are implementing this concept of connectivity on a huge scale.

Most of north-east Tasmania is within the Ben Lomond bioregion. The following description is from 'Identifying Priorities for Biodiversity Conservation' in State of the Environment Tasmania (2003):

Ben Lomond Bioregion has a moderate priority for reserve consolidation. Comprehensiveness is high and adequacy low (11%), with a substantial number of unreserved threatened ecosystems. Representativeness is low to moderate: alpine and subalpine vegetation is strongly represented in reserves, but lowland forest and woodland ecosystems are not. Expansion of forestry plantations operates as a regional scale threatening process.

Threats to the integrity and functioning of ecosystems include climate change, coastal development, forestry, land clearing, large dams, feral species and diseases. For example, many dry forests and heathlands are highly susceptible to dieback caused by root rot disease ( Phytophthora cinnamomi ), which can have a devastating impact on the native flora.

Extinctions of plant and animal species present a worldwide crisis for biodiversity with potentially catastrophic consequences for the ecosystems which we rely on for food, air, clean water, carbon storage and other resources. "Habitat loss and habitat fragmentation are the two major causes of species loss," Dr Peter McQuillan of the University of Tasmania .

Animals, plants and forests will have to migrate or evolve to survive in response to climate change. Small isolated reserves will be like sinking ships for the animals and forests they contain. Healthy, interconnected populations of animals and plants will maintain the genetic diversity which allows for adaptation to new conditions. It is a long term vision.

How you can help Linking Landscapes and habitat protection

As part of the Tasmanian Forest Agreement process all of the reserves mapped under the Linking Landscapes project were earmarked as future protected areas to be managed by Parks and Wildlife. As everyone knows when the Liberal government was elected the Agreement was dismantled to some extent however all of the proposed reserves are now subject to a six year moratorium where no logging (or firewood cutting) is allowed. In addition these areas are now managed by Crown Land Services (in reality Parks and Wildlife) rather than Forestry Tasmania. So while we have not achieved the outcome we sought yet we are a lot closer to realising a well connected protected area system in North East Tasmania than we were prior to the Tasmanian Forest Agreement.

The Tasmanian Forest Agreement also generated a number of important scientific reports which highlighted the conservation significance of the East Coast of Tasmania. The Verification of heritage value of ENGO-proposed reserves lVG Report 5A ( Hitchcock 2012) noted that ".......those parcels forming the East Coast connectivity corridor have been assessed collectively to have National Heritage significance-one of the more important latitudionally connected tracts of native habitat in Australia". This report acknowledged that the Linking Landscapes report produced by the North East Bioregional Network was "a key document" providing valuable guidance and the Linking Landscapes data base was "directly relevant to the verification process". In other words the Linking Landscapes document and data set was critical in assisting scientific experts in their assessment of the conservation values in North East Tasmania.

In addition this has led to the East Coast Conservation Corridor report which builds on the now recognised National Heritage significance of our region.